Do all girls really want to play with pink dolls and do all boys want to crash blue toy trucks? Of course not. But there might be something in it. 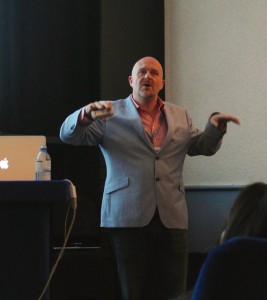 A hugely interesting report that laid the toy industry’s tactics bare. Gary Pope demonstrated how Child Development stages can be reinforced by archetypal imagery and feed into gender representation and child self image. It also revealed how fathers of sons are especially sensitive around their child’s gender representation.

The passionate speaker Gary Pope reported on this research with an engaging no-nonsense approach that really got the audience gasping, clapping and nodding. The research covered a hugely saturated topic but delivered a thin slice of research based on 60 kids, 60 parents and various academic papers.

So, girls love pink and boys love blue – Is this love of pink or blue innate? The short answer is: No.
Yes, girls like girls toys and boys like boys toys BUT pink or blue are a learned concept of the market place. In Victorian times, boys liked pink (red colours symbolised strength) and girls liked blue (flighty like the sky!).

Biology, Culture and Society help children understand their place on the gender spectrum.
Biology has helped us to categorise and solidify archetypes of gender in our brains.

Using Piaget’s stages of cognitive development as a framework, Gary explained how from as young as 3 months, children start to differentiate between male and females. This gender identification continues and peaks at around 5 and a half when Princesses and Racing Drivers reign. This tallies with the most popular broadcast brands within age groups too – Spiderman and Disney Princess at 5 are both very polarized, easily identifiable gender skewed characters.

Gender identity only became colour-coded in the 20th Century and it was around 30 years ago that the market defined ‘girl stuff’ with pink and ‘boy stuff’ with blue. We reinforce the Culture and Society impact with positive association; a boy! Here’s a blue mobile. Here are comforting noises and first experiences associated with blue. Here is society telling you, boys stuff is blue. Therefore, boys like blue.

Children do enjoy playing within themselves and their gender identification, especially when they dress up. It’s all part of exploring the archetypal dimensions of their personality and gender and ultimately makes them balance and be the person they’re going to be.

But, according to Gary’s findings (and the sharp intake of breath from the audience), parents, especially fathers, are uncomfortable with boys dressing up in a dress. There’s a correlation that dad’s want their boys to be more boy-like. This research suggests that parents are much more relaxed about their girls’ gender identification than they are about their boys’.

Interestingly, channels and tablets seem to be gender neutral – kids find what they like and they just get on with it. Gary spoke very passionately about his belief that the toy companies are forcing this gender polarization thing to happen. They don’t make for boys and girls.

He left us, as content providers, with an inspiring mission; “Creators have a big opportunity to help children explore their gender identity in the right way. It’s a massive opportunity. Take it!”

For full details of the speakers check the Session Guide.
View the presentation: Research 4