Put your money where your mouth is – Report 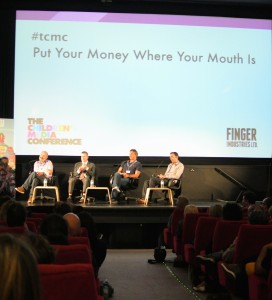 Now in its third year, Karl Woolley (in stand up mode) introduced the pitching session that pays out real cash, even if it’s only a hundred quid for a three month option.

First off was ‘Gold’, a TV show featuring ventriloquist Marc Griffiths. Although the panel enjoyed his live presentation, they struggled to understand how it could work for television. Michael Carrington admired the performance admitted that he had once had the ambition to become a ventriloquist but, sadly, had ended up in television instead.

The first wad of readies went to Giles Bones for 2D animated comedy ‘Tube and Victor’. Michael declared himself OUT, but there was a bidding war between the other three Dragons and Giles walked away with £400.

Third up was ‘Annie the animal tooth fairy, a show from Sun and Moon and Mum’s Creative Content that would fit well in the younger end of the CBeebies schedule. Orion thought it too young for Disney Jr and Oliver thought it was difficult to finance a show for the age range. It was left to Michael to offer £300.

The final presentation was from Chris Kemp. His TV show was hailed as ‘The Dukes of Hazard’ meet ‘The Simpsons’. ‘The Magnificent Stunts’ is based on a series of successful apps created by Chris, including ‘StuntGuy’, ‘StuntGal’ and ‘Reg the Roadkill’. Oliver Ellis described the concept as ‘twisted shit’ and promptly put £100 on the table. As the other Dragons went out, one by one, the audience and Karl Woolley shamed Oliver into doubling his offer and the final deal of the session was done.