Pact: Give Kids A Break! – Report

Pact makes the case for a UK tax credit for children’s TV. 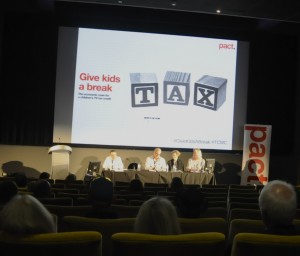 The session opened with a video clip from Floella Benjamin who has long campaigned for support for the children’s television industry and she put the opening question forward – if there are tax credits for high end drama and tax credits for animation, then why not for children’s live action too?

John McVay then presented the Pact report, a hard copy of which was handed out at the end of the session, that puts the economic case for a children’s TV tax credit. The current Chancellor is apparently open to the idea, but the case for securing the future of children’s television has to be put in numbers argued McVay.

Historically, live action has been at the heart of the broadcast schedule producing iconic programmes we all love and remember – in short, the UK has produced commercially successful, award-winning shows across the decades.

But investment in the industry has fallen and restrictions on advertising during kids’ programming, albeit well-intentioned, have hit the commercial broadcaster children’s slots hard.

As a result, the industry remains subscale, there’s only really one buyer (the BBC) and the risk of productions and talent moving to areas and countries where more financial incentives exist is huge.

But as the high-end drama and film tax credits have proven, tax credits make good economic sense; for a relatively modest sum, the tax payer ends up better off and this is the bottom line of the Pact report.

Most importantly though, it would allow the UK to compete; to tap into the international demand for high quality English language children’s programming.

In summary, the benefits such a tax credit would bring the UK are:

After McVay’s presentation, the floor was opened to the panel:

Billy Macqueen from Darrall Macqueen argued that looking for the last 20-25% of a production budget now is so much tougher than before so many forego their production fee just to get a show off the ground. One of the reasons for this is because subsidies within the international market make foreign production more competitive, so the best creative concept doesn’t always win for them. The UK is known for its quality productions but it’s just too difficult to produce the volume broadcasters expect.

Val Ames from Kindle Entertainment made the point that the level playing field argument that was made for animation, is just as important for live action. Like Macqueen, she made the point that the number and level of incentives elsewhere, leave UK producers on the wrong foot from the start, often in a position where they lose rights as international co-production partners are able to bring more to the table. She also argued that the playing field wasn’t level internally, for example, the high end drama tax credit has meant rate cards rocketed, as crew are now able to demand higher fees. She also sited volume and how difficult it is to make sales, when you can’t produce a high number of episodes, making it virtually impossible to get a distribution advance.

Genevieve Dexter from Serious Lunch also put the volume argument forward, saying producers often lower the number of episodes to limit the budget, but this in turn limits the exportability. Another 20-25% in tax credit would help increase volume. Too many co-productions are currently structured to fit funding models from respective countries, so much ends up not even being shot in the UK.

The question was asked whether foreign commissioners would look at the UK as an investment opportunity if there were tax credits and the overall response was yes.  Broadcasters who wouldn’t normally consider the UK, would with a tax credit and this adds to the list of doors that might be open to live action producers.

Without additional funding, the UK isn’t able to sufficiently compete, so the overall economy loses out. The UK may be known for quality, but it must be able to deliver at prices comparable to others in order to remain in the market. The overall message is simple: a tax credit would help improve the competitive landscape.

The following points were also put from the floor:

Anna Home argued that more variety and more competition is also good for kids as it makes content more relevant and keeps it local.

Oli Hyatt made that point that overall there is a disproportionate amount of money spent on media for kids – proportionally less than on adults, given their numbers in the population, and children deserve better. Hyatt argued that it was not just about putting the economic case but also about making the creative arguments and finding ways to bring the case further up the list of Treasury priorities, whether that’s writing passionate letters, lobbying your MP or crying on the doorstep of Number 10.

Clearly there was a difference of opinion about approach, but one thing was clear, the room supported the idea of tax credits for children’s television wholeheartedly.

For full details of the speakers check out the Session Guide here.