We all love a good joke, and humour is important in producing entertainment for all ages, including children. However, how much can humour and humourous content aid learning? 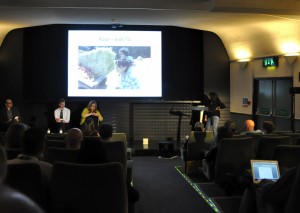 Humour is a vital tool to creating a relaxed atmosphere and receptive group for learning. However, it is a socially interactive tool, so while humerous media can enhance this dynamic, it needs to primarily come from the relationship between the teacher and their class.

Who was your favourite teacher at school? Now think about whether or not they were funny. If you’re responding like the audience in this session, then the likelihood is that that teacher used humour as a tool of engagement. And they probably influenced what you’ve gone on to become. So humour is powerful enough to influence how we live.

Rani Price has worked as a television presenter and now runs workshops in nurseries. She explained how humour is used in both mediums to create an environment where information can be conveyed.The key to engaging children is finding your language which hooks them in. In both settings she used humour to build trust and get attention.

Simon Kerrigan (a proper teacher!) dispelled the myth that bringing humour into the classroom can lead to a breakdown in discipline. In his experience bored students are far more likely to cause in discipline problems. He uses humour to create engaged, involved students who enjoy lessons.

How does laughter affect learning? It attracts students’ attention, gets them asking questions, helps to break the ice making them more likely to get involved, make mistakes and ask questions. In Simon’s experience, humour helps to control behaviour; it give the pupil the attention they’re craving, so then they’re more willing to participate. It creates a good atmosphere and shows the class that their teacher is a person too, helping them all work together as a team.

Simon has at times used comedy entertainment shows in the classroom. But only if it facilitates learning, is well-planned, appropriate and contextual. An exploding bath tub on ‘Braniac’ for example. Electrocuting Eric Knowles from ‘Antiques Roadshow’ was certainly entertaining, but as it didn’t explain the science behind this minior torture, was considered to Simon to be a mere distraction.

Professor Sophie Scott (who has a very long and serious scientific title) was explaining that there isn’t really such a thing as someone with a sense of humour, rather our laughter is a response to show that we like them. (This was a pretty tricky concept to grasp seeing as Sophie is incredibly funny and had the audience giggling throughout her presentation.)

Laughter fist emerges in parents and babies – primarily through tickling. You can’t tickle yourself so from its outset laughter is an interactive behaviour. As we develop, laughter becomes an invitation to play. It is done more with the people you know. We use it as a way of showing each other that we like each other, we’re part of the same group. Laughter happens more face to face than on the phone or via text, so it is incredibly socially important.

To sum up, “Laughter is the shortest distance between two people.” So to utilise it in the classroom is a way of changing the relationship between the pupils and their teacher. Using television to help this may enhance this dynamic, but it’s the teacher’s and their humour that’s the key.

Full details of the speakers are in the Session Guide.
The producer’s view of the session.