Focus on Europe: What Works Where? – Report

Overall the message appeared to be one of partnerships based on common vision rather than financial incentives – where they may help get the volume of production off the ground, cash doesn’t necessarily mean quality. 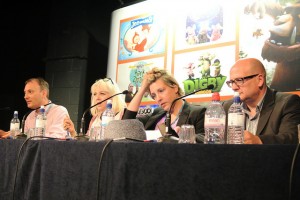 The session opened with a presentation of audience rating for European Kids TV by Claire Mitchell from Eurodata TV Worldwide. Key points included:

The top channels tend to be free channels with the exception of Portugal and Finland where the top rating channels for kids are pay TV channels.

With regards to genre, viewing is split 50% animation, 25 % live action and 25% factual/entertainment, but it does vary across countries. For example, in France the figure for animation is a whopping 90%, but in Sweden animation accounts for only 15% of content.

This high proportion of animation production has something to do with the fact that French broadcasters such as Gulli have to air 35% of French made animation during the day. Germany on the other hand don’t have so many quotas, nevertheless broadcasters such as KIKA do put an emphasis on local content. Nordic broadcasters also like local production – live action is particularly shared across the Nordic countries but animation is often bought in.

Animation is the top travelling genre as it’s easy to dub and less culturally specific. But although factual and entertainment tend to be local, formats can sometimes be adapted (e.g. Backyard Science adapted for the German market from Australia)

Some online players also offer exclusive online content now, but most viewing is still through linear TV; free TV channels still have the highest market share and local broadcasters tend to be in the lead.

After the Eurodata presentation, questions were put to the panel:

First to be noted was the high level of animation and as Sarah Muller pointed out, there is an awful lot of animated content produced, particularly in France, and it is easy to dub. Animation works because of stories and it’s that which should be taken from animation and put into live action.

What live action themes work? Angelo Abello suggested European drama is considered dark in tone and picture; soaps which have a mystic weave are popular in Europe, whereas in the US it’s the other way around. Katharine Pietzsch suggested themes that have a lot to do with ambition and dreams coming true work the best.

The common response to the question about which genre styles work best, was that universal themes such as fantasy, magic, stories children recognise and can develop themselves work the best.

Questions then moved to co-productions. All panellists advised producers to make sure they figure out with potential partners what will work early on. There needs to be a common vision among partners from the very start. It’s also worth focussing on the strengths of both partners, e.g. the UK is strong in scripting, the French in animation. They also suggested producers do their homework: become aware of what broadcasters think their audiences are – think through the heart of the show and who would be sympathetic to that. Build relationships, find the right partners.

Rosemary Klein also advised that discussing rights was crucial at the start: tackling the ‘potential cacophony of rights’ and agreeing who gets what, how things are divided up, ensures a good relationship.

With regards to working with quotas, the question about what would happen if there was a live action tax break was put. Overall the response was positive as tax breaks bring money to the business: goods and services flow to where it’s less expensive and the UK is only just moving into tax incentive areas unlike Canada and France who have had that luxury for a while.

Looking to the future, the panel was asked what makes a good saleable brand. Katharina Pietzsch answered that a series needs to be good quality, travel well, and available multi-platform.

Staying with the future theme, they were asked how new business models may affect things – Klein answered that although linear TV is not dead, soft online production was on the rise and advised those sitting on archived IP not to.

Overall the message appeared to be one of partnerships based on common vision rather than financial incentives – where they may help get the volume of production off the ground, cash doesn’t necessarily mean quality.