Things to consider if you want to break into the Asian market: 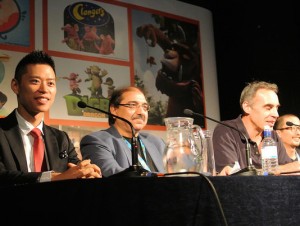 A few understandably sore heads gathered admirably on Friday morning for this informative dip into the children’s media space across Asian markets. With so much to cover, we unfortunately ran short of time, but there was plenty here to provide food for thought.

Biren Ghose (Technicolor India) took to the stage first to talk us through breaking into India, sharing his own experiences and expertise along the way. One of his most astute (and amusing!) observations was around learning to handle what he called the ‘Five-Headed Monster’, which is the key to succeeding in India! The heads are Talent, Infrastructure, Technology, Production and Finance/Commerce. Biren finished, by way of opening to the door to those in the west wanting to take a dip in India, by talking about his notion of an M101 – the road for people who want to work between the east and west.

Trevor Lai (Up Studios) gave similar insights in his portion of the hour, offering his expertise on how to find success in the Chinese market. After openly (and smilingly) admitting that animation is not the fastest way to make money in China, he offered delegates some more encouraging advice. The overriding message from Trevor was to look beyond the numbers. While high download-rates and viewership would suggest success is probable, there are other factors to consider. For instance, there are plenty of established regional players in childrens’ media, so it’s best to build achievements abroad, gain a track record and build partnerships with larger brands before you just drop in.

James Chen Gu (UYoung Media) echoed many of Trevor’s observations (even admitting he was very impressed by Trevor’s presentation!), but also elaborated to discuss a term his company have coined called, ‘Dual Customers Strategy’, which recognises that the current generation of parents differ from those of yesteryear, as they have grown up with animation. Therefore, it’s important to focus on providing for both parents and young children – in short, families!

Neil Ballantyne (British Council) was unfortunately forced to be a little rushed in his contribution to the session, but shed light on some noteworthy differences between Asia and the UK, thanks to his role with the British Council. For instance, the popularity of the Phablet in Asia, where the iPad just didn’t catch on, and the popularity of Apps (13 out of the top 20 countries for Apps-reach are in Asia!) He also dropped a real nugget of gold when telling everyone that he has found distributing locally with established partners in Asia has been more effective than with their own global brand.

‘The temptation to quit will be greatest just before you are about to succeed.’

For full details of the panel, check the Session Guide.