CBBC’s Sue Nott introduced, and Malorie came to the podium with the title of the talk, ‘The right to be seen, the need to be heard’, projected behind her.

Malorie painted a vivid picture of a childhood of reading. Her parents were hot on education. There was a house full of books – all non-fiction – but a father who could not understand the purpose of fiction; ‘It’s not real,’ he would say. So Saturdays were spent reading in the local library, with a packed lunch, and she would take as many books out as her ticket would allow to get her through the week. 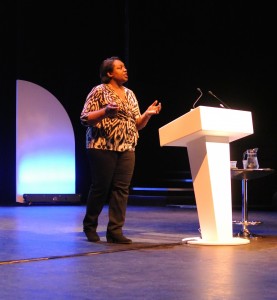 Malorie’s motivation to write has come from an ‘I can do’ attitude that soft racism failed to extinguish. She soon realised that she was not reading about black characters. In fact it wasn’t until Alice Walker published The Colour Purple that she found a writer who did write about black people, and she was twenty-one by then. It was an incident at school that pushed her forward. She had decided that she wanted to teach English but was told by her own teacher that she was unlikely to get an A-level in the subject. ‘Black people don’t become teachers,’ she was told.

Apologising in advance to any children in the audience, Malorie said, ‘I’ll show the old cow.’ And she did. She got her A-levels and went to Goldsmiths. Then she diverted into computer science for ten years.

Not sure if she could write, she enrolled for a series of writing workshops, eventually focusing on children’s literature. She then noticed that in a bookshop that had thousands of books on display, only one had a black character on the cover. After two years and 82 rejections, she got a ‘yes’ from a publisher.

Malorie explained that her early books did not say what colour her characters were and, once she had main it clear her characters were black, she still did not tackle racism. Two events inspired her to tackle the subject head on: the Stephen Lawrence inquiry and her first train journey in a first class carriage when she was accused of having a stolen ticket. The result was ‘Noughts and Crosses’ – the first book in the series based in an apartheid world where black crosses enslave the white noughts. The main character, Callum, a boy from the white minority nought community, was the closest she had got to writing about herself.

We were taken on a journey through the highlights of her career and in the Q and A session afterwards she revealed how she put a novel together; the idea coming first with a brief synopsis before writing extensive biographies of each character. Only after planning the structure and chapters of the novel does she start to write.

It is clear that Malorie Blackman is passionate about the need for role models for black and ethnic children as well as white working class; her inspiration came from figures like Muhammad Ali and Martin Luther King, but, perhaps, the event that inspired a struggling writer in her twenties with sixty rejections behind her to keep going was a book signing by Alice Walker. Malorie had asked her to write ‘Don’t Give Up’ next to her signature. That’s what Alice Walker wrote and Malorie Blackman didn’t give up.