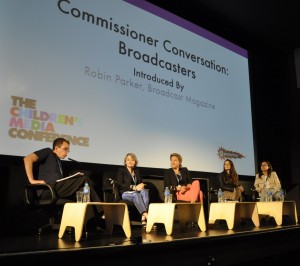 A moderately well attended early morning session was kicked off by each of the commissioners introducing themselves and their channels:

Sioned Wyn Roberts, Content Commissioner, Children’s, Learning, and Digital at S4C opened by telling us that a massive 90% of their content is original. They’re interested in content that works best for their audience, but that doesn’t necessarily mean it has to be in Welsh. S4C have recently gone for digital content in a big way and like to try and do things differently by giving new ideas a launch pad.

Katharina Pietzsch, Director at ZDF Junior oversees co-productions and investments in kids programming. International co-productions have been a part of the ZDF remit for high quality programming for at least 25 years. They have very little local content as it is expensive and doesn’t travel well, so co-productions work best for them. Pietzsch advises producers to approach them early on if they are interested in co-producing so that a common ground can be established from the get go. The target group ranges from pre-school to teenage (13-14 year olds), but is a little more girl skewed as pure boys action doesn’t really work for them.

Stephanie Wahlstrom, Channel Manager at the CSC Media group, looks after two of their four channels, namely Tiny Pop and Pop Girl. The first of those is targeted at 4-6 year olds, with the second towards 7-12 year old girls. CSC also run POP for boys and girls aged 7-9 and Kix targeted at boys aged 7-12. Most of their content is acquired but they have just started producing original content. Ideas often originate in-house, but they are now more open to the concept of commissioning others for production. ‘Topsy Turvy Tales’ is one such example but Wahlstrom was keen to stress their tiny tight budgets and even tighter schedules, claiming the time scale between idea and broadcast on ‘Topsy Turvy Tales’ was just 6 weeks – this produced an audible gasp from several members of the hitherto silent audience! Their programming schedules often work to themes, e.g. ‘imagination month’ or ‘fashion summer’ and much of their promotion is done through these themed stunts. In addition, each channel has its own interactive website, where audiences can both decide the outcome of stories through a poll or can take place in activities relating to the show. They find this collaborative way of working with their audiences is way more productive than traditional marketing.

Sevilay Bozdemir, Manager at TRT Cocuk (Turkey) helped set up the channel in 2008. They are still a very young channel whose scheduling is structured to fit around local kids and their play time. In the beginning only 50% of their content was original, whereas now it is as much as 80%. They are very keen to co-produce with local production companies and although open to the idea of international co-production, they seem to see it more as a way of getting international experts to work with their local talent. TRT’s target audience is a broad stroke 3-12 year olds, but Bozdemir stressed that they don’t do early pre-school and insist on starting at 3 years, however, I would suggest their younger shows may well be classed as early pre-school in some territories.

These introductions took the majority of the session but a few general questions were put to the panel too:

The first being around the appetite for international co-production. Pietzsch sited ‘Wolfblood’ as the first co-production between ZDF and BBC; it was done this way because competition between broadcast platforms is so intense and production so expensive, that it makes more sense for them to co-produce now than it did before. Wyn Roberts agreed that co-productions were really important as a way of getting expensive productions such as animation off the ground. For example, even if S4C just acquire a property, it opens up Welsh funds to the project. Tax breaks are also a huge help and support for the live action tax credit was voiced here too.

When asked how children are watching content, Wahlstrom and Pietzsch confirmed that although children go online, content is primarily viewed via linear TV still – online complements that, but it’s not the main access point.

Finally the commissioners were asked about their worst and best pitches: across the board they all said those who had done their channel research and pitched something that had clearly been tailored to suit the channel’s audience, worked the best. However, sometimes all it takes is an image, an element of a conversation or a clear, enticing paragraph. The worst pitches are the desperate ones, or the arrogant ones from those who try too hard to be cool – it is clearly a very fine and subjective line!

For full details of the speakers check out the Session Guide.