Coming Together Or Falling Apart – Report

Exploring the future of the children’s media and content industries through to 2020, in the age of digital transformation.

By 2020, this is what will happen, according to our panel (you heard it here first!)… 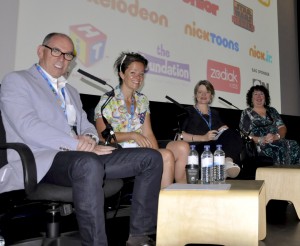 This lively session was the perfect way to dust-off any cobwebs still lingering after the drinks reception. It helped that the hour was particularly focused (but fun!) as the impact of new media in the near future was determined by both the panel and the audience using a series of entertaining scenarios.

Moderator Jon Watts (MTM) put the scenarios to the panel, who discussed whether or not they thought they would come to pass by 2020. Towards the end, the audience had the opportunity to cast their own votes via a show of hands, making this all at once an engaging and thought-provoking session.

The first scenario, ‘Digital Media Eats The World’, involves the decline of linear channels and broadcasting with on-demand becoming the dominant form of television consumption. The panel were generally in agreement that such a scenario was not far off the forecast, although 30% of children are still reading/being read too – and not on tablets either!

The second scenario, ‘Playing To Win’, was more readily dismissed by the panel, however. This scenario sees the games industry becoming the dominant children’s medium. While the panel acknowledge that games will be ‘up there’ with film and television, they did not agree that they would dominate, citing intrinsic limitations as the reason for their scepticism.

The third scenario, ‘The Death Of Print’, speaks for itself, and it was difficult for Rob McMenemy (Egmont) in particular to remain un-biassed as he discussed this topic. Indeed, as Jon described the decline of book and magazine markets, with children’s publishing potentially moving online, Rob answered by stating, ‘You’re such a depressing chap!’ And, although the panel denied this scenario would transpire by 2020, they had to acknowledge, reluctantly, that, long term, print is ‘going down’.

The final scenario (thanks for bearing with), entitled, ‘A Thousand Flowers Bloom’ was seen as the most likely to unfold in the near future by the panel. This scenario sees the costs of entry fall as content creation tools proliferate and digital platforms provide easier access to audiences. The market will fragment, rather than consolidate, and ‘creative destruction’ becomes the norm – new properties will still burst onto the scene, but they’ll have shorter life cycles. However, check out the takeaways above for the panels’ definite verdict on what will happen by 2020…

‘In a few years’ time, we’ll have a much clearer picture of what we’re offering children in media. Right now, we don’t know where we’re heading.’ – Terry Clutterham, Publishing Director – Sculpture.

For details on the speakers in this session – please see the session description.