How do we make more children’s films in the UK?

It can be done! But it’s long and slow and we really need to push the BFI and politicians and film schools and financiers and distributors to take family films more seriously. 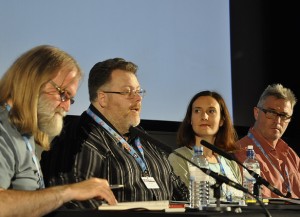 Justin Johnson from the BFI said he was disappointed that there are so few UK family films for him to promote either at the London Film Festival or at festivals overseas. There are new films in the pipeline, with four films to be released in the next twelve months. Justin has been tasked by the BFI to research what the organisation should be doing to stimulate more family films. His results will be released at the London Film Festival in October.

So far he has ascertained that there is generally a feeling that family films are important – developing cineliteracy and raising the future audience but people seem reluctant to put their money or their talent where their mouths are. He has also spotted leaks in the talent pool, with film schools churning out students that want to be auteurs rather than family filmmakers.

David Sproxton from Aardman Animations agreed that the UK has a shortage of skills, both in development and in the technical areas. He explained how they had come back from the Hollywood model, working first with Dreamworks and then with Sony, to a smaller, British indie model of finance. With the big companies they had had 100% funding, and experts in marketing strategies on a global scale. By comparison funding for the forthcoming ‘Shaun The Sheep’ movie is like a patchwork quilt.  Aardman’s experiences in the US had highlighted just how skilled Hollywood is in story craft and marketing. David  said that back in the UK we have to deliver at that level. “You don’t need expensive production but you do need a bloody good story.”

Robert Chandler from Space Age Films Ltd agreed; adding that even when you have that  story (his was written by Oscar Wilde, so definitely counts as ‘bloody good’), the financing is arduous and time consuming. When he began to develop ‘The Canterville Ghost’, it was too expensive to animate in the UK and he had to go to Canada. But the deals fell through and he had to come back to the UK with a much reduced budget. Fortunately in the years in between, the Tax Break for animation came into play and Britain was once more a viable proposition for production. Robert also stressed that there are issues with skills in the UK though – he had witnessed the British brain drain in Canada where many UK animators and creatives had migrated for work.

Having heard inspirational but tough stories of ongoing and hopefully successful projects, the room was introduced to Viola Gabrielli, from Kids Regio in Germany. Kids Regio lobbies to ensure access to a wider choice of kids films. It offers a platform to discuss synergies and find solutions and acts as a bridge between stakeholders, politicians, funders and the research community. Its purpose is to stimulate more live action European cinema for young people. It has taken time and tenacity but after a number of years, it has paid off. There is now the European Young Audience Award and there is a real push to develop films that are feature length, live action, original (not adaptations) profound stories dealing with children’s topics. There are funds for development and training for writers; an Academy for Children’s Media!

What a fabulous success story for a change. The general feeling in the room was of optimism. Somebody said we should rename the session, “Children’s Films: Now Remembered”. But the optimism was tinged with a reality check – Justin Johnson seemed vague about what his bosses at the BFI really wanted from him or his research. There were calls for the BFI to be pressed a little harder. Quite hard actually and politicians too. And the Film Schools.  As with so many things to do with children, there needs to be a big change in attitude to young people. If they can do it in Germany, then why not here?