As the Licence Fee and Charter come under review, the CMF asks whether the BBC will commit to the children’s audience and asks stakeholders within the world of children’s media whether it should. 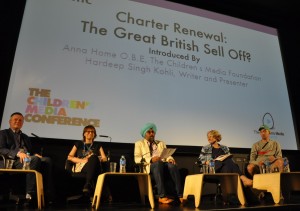 It’s a shame the session around such an important debate was not better attended, if not only for Hardeep Singh Kohli’s witty chairing! He began by asking the Helen Goodman whether government should force the BBC to ring-fence part of the licence fee for children’s television; Goodman pointed out that although it was mandatory in the past (the legislation was relaxed in 2003) what the BBC did with the licence fee was up to the BBC Trust and not government – although they would of course support the production of children’s television in the UK.

As Oli Hyatt pointed out though, the BBC is not the only player. In his opinion, what is most important, is that public monies are spent proportionately. As the BBC is supposed to represent all communities, the BBC should ensure children are fairly represented.

There are other funding models out there should the licence fee be cut and subscription services were cited as one of the main alternatives. However, as Jeanette Steamers pointed out, if the BBC were to adopt this model, it would change the nature of their services, making it more difficult to make certain types of programmes. She suggested more viable alternatives could be found if amendments were made to how the licence fee were paid. Giving examples from mainland Europe: in Germany it is a per household fee, rather than a per set fee; in the Netherlands it’s a tax; she also suggested decriminalising non-payment should be considered.

Joe Godwin was adamant the BBC will always be committed to high quality children’s TV but said the biggest challenge for children’s content is realistically and credibly working out how children engage with content in this multi-platform world. Steamers agreed suggesting this was a transitional phase: one where viewing habits are changing. Her biggest worry is whether the BBC will still be there for the next phase.

Hyatt again put the point that although it’s an exciting time for all in the media, we still need to ensure children are getting a proportionate and fair share of the pie. He argued that in the past, 9% was spent across channels on children’s content, although Godwin disagreed. Hyatt didn’t feel either that any of the words previously spoken about protecting children’s media had been mentioned again but was rather cut short by Goodman who made an off-tangent comment about repeated content being 90% of children’s TV and that is not what kids want, suggesting more should indeed be spent on new and original content. Although like any politician Goodman would not commit to saying children’s TV should get x% of the licence fee, she did at least say children’s views should be taken into account.

As questions went to the floor, Greg Childs brought the discussion back to Hyatt’s point about the apparent reluctance of BBC management to ‘stand up and be counted’ with regards to children’s TV as we go into this crucial round of charter renewal. Godwin defended his colleagues and argued that the detailed debate had yet to begin suggesting more may well be said as the ground rules for debate are set.

Someone else from the audience also asked about PACT wanting an increase in the licence fee and whether the panel had an opinion on that. Goodman said it be about balancing what people want against the cost of living, before moving the discussion on to bring in other public service broadcasters who she felt had wrongly exited the debate. Having just had their licences renewed without any discussion about their contribution to children’s television, she felt this was unjust.

Steamers agreed that it was easy to criticise the BBC when other channels are let off the hook. She gave the example of other countries where all children’s television is bought in – at least we still have the BBC supporting local content.

Anna Home, Chair of the CMF posed the worst case scenario question – could the BBC survive without the licence fee? There was some disagreement as to whether the commercial broadcasters would relish such an outcome. Goodman suggested they would not, as they valued the competition, i.e. common sense would in the end prevail. Steamers was less optimistic saying many can’t wait for subscription to come. Godwin thinks the licence fee will survive, but suggests that as the use of media is changing, and so the licence fee needs to adapt to the way content is consumed. He also suggested the BBC needed to talk more about the value of its services (e.g. it costs the licence payer 40p a day in real terms, apparently), telling a more positive story instead of being on the defensive all the time.

Someone else from the floor asked about the value of in-house productions, as much had been said about protecting local content. Steamers said it was important to have in-house production, as the BBC is also about a system of beliefs and values. Goodman made the point that the job of a public service broadcaster was to reflect the diversity of real life, with Godwin suggesting that could best be ensured by the BBC. He suggested the BBC was also seen as a cultural institution that had a very specific culture of children’s TV they had nurtured over the years.

Anna Home closed the debate suggesting an optimistic but qualified future; there was definitely a call to arms and a call to tell the story.

For full details of the speakers can be found in the Session Guide.