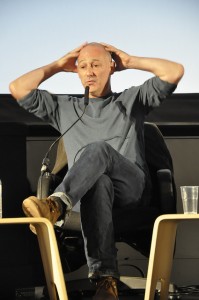 The story begins on television in 2000, when writer Elly Brewer was given the original Jacqueline Wilson text and asked what she could do with it. It was clear from the outset that it was a great television proposition with lots of great characters and stories, and lovely illustrations that would lend themselves to animation.

Fast forward five years and Dani Harmer, playing Tracy Beaker, has grown up. But the Beaker brand was still incredibly popular and the BBC believed there was still plenty of mileage left in it. It was deemed plausible to bring Tracy back, since it is often the case in which children that have grown up in care return to work in the sector. Mike also felt like a natural return character as a reassuring ‘father figure’ presence in the world. ‘Tracy Beaker Returns’ proved hugely successful, but after three series, Dani Harmer decided that she wanted to move on completely from Tracy, so the team had to once again consider if this was the end of the road.

Elly believed there was still potential in the environment and the supporting characters in ‘The Dumping Ground’. What’s more without Tracy at the centre of the world there could be opportunity for deeper, darker stories. The Dumping Ground was commissioned. The show continued with the setting of the care as a warm, safe and colourful environment, a heightened reality in which a new ensemble cast also gave an opportunity to focus on how twelve distinct characters can each react to the challenges of life put before them.

And the more recent series deals with tough issues: it’s not uncommon for stories to look at racism, mental health, homelessness, domestic abuse, and immigration. Although there still a big a responsibility to deliver the series with due balance and thought, since this is often the first time the audience might come across that particular subject.

Ideas for the series are usually generated through research from the production team or the writers bring stories they want to tell. And they don’t have to be happy endings: it’s very important for the show to reflect the contemporary world as much as it can.

Asked what lies at the heart of the series popularity, the panel concluded that The Dumping Ground tells issue based stories in surprising ways: but always with heart.

I’m usually occupied, either being a mum, writing, producing, singing or telling or listening to stories. I’m the Assistant Producer of the Royal Shakespeare Company’s live broadcasts to cinemas. Two weeks ago we broadcast Henry IV Part II to 380 cinemas across the world from Stratford Upon Avon. I also… Read more