Katie Simmons attends a session that bought together an outstanding panel with a television portfolio that demonstrates real passion and respect for the children’s audience with authentic child performances at their heart.

Different approaches are needed depending on whether your child performers are in vision or voicing an animated character. To achieve authenticity there needs to be a level of professionalism and mutual respect afforded to the child performer and their director. Not running lines, clearly setting out your expectations and thorough casting seem to be the key to get the best from your child performers. 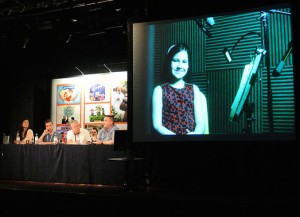 This session was chaired by Ian Smith from The Television Workshop and he asked the panel if they thought it was a good idea to cast under 8s in pre school scripted drama?

Maddy Darrall from Darrall McQueen drew on her experience as the Executive Producer on ‘Topsy and Tim’, a live action preschool drama. She feels that showing children on screen is an essential way to connect with that audience!

They put a lot of work into making the children feel comfortable and not like they were walking onto a set every day. They built and authentic 360 set. They used realistic lighting. They had a real front and back door. For the child actors nothing about it felt like a set – this was vital for authentic performances.

One of Maddy’s key points was that they didn’t rehearse the children. They expected their child actors to turn up knowing their lines. But there were no marks, no rehearsal and a lot of improv. So the Camera team and adult actors were kept on their toes and needed to think whilst they were on them! This meant they could generally use first takes and deliver genuine, authentic, delightful performances.

Maddy showed a remarkable clip of the characters ‘Topsy and Tim’ finding out that their friend wasn’t going to big school with them. The child actors didn’t know what was coming so their response was genuine, and incredibly improvised. The end result was stunning. Obviously the production team’s efforts and dedication has reaped huge reward.

Next Knut Næsheim spoke. His recent Norweigen production of ‘Summer With Dad’ has won the Prix Jeunesse 2014 (I told you this panel was good!)

Knut showed a clip from this 8 episode series; an honest, gritty production about a child and his dad going camping to get to know each other. He showed an exceptional clip involving his child performer almost shaving his head. The authentic performance shone through with heart-warming humour and real, accessible emotion. It demonstrated an exceptional performance. And the actor was 5 years old.

Knut explained that for him the younger the actor, the easier it is to encourage an authentic performance. They have no conflict with authenticity, the only problem lied within legal working hours for children.

Again, casting played an imperative role. He was finding it very hard to find a child with the sensibility of his character. He finally found him during a research session in a Kindergarten. Knut was so impressed with the way this child took his task of handing out paper to the class so seriously that he knew he would take working on his production very seriously too.

The importance of mutual respect came in here and he made a deal and kept a professional relationship with this child, making it very clear what was going to be expected from both of them during the 18 days of filming. Knut’s straight down the line attitude shows real respect and forthrightness – and it clearly worked.

He also agreed that keeping the text fresh and not rehearsing lines is key to authentic performance. This production’s wonderful ambition and raw emotion displays the level of ambition that programme makers can have.

Colin from Sixteen South began the discussion of how directing children purely for voice performance can differ. During his experience on ‘Lily’s Driftwood Bay’, he had to ensure that his character’s Belfast accent not only carried authentic emotion, but that it could be clearly understood for their North American audience.

After casting the perfect Lily who “sounded like Lily looked” Colin really tried to find the magic of relationships within her performance. He wanted a real kid with a bit of gravel to her voice that wasn’t a polished performance – and he found this when his actor was almost shouting!

Colin’s approach was one of feeding his child actor the lines and she would repeat. When questioned if this was indeed authentic, he responded that it was a requirement of the animation. If the performance sounds authentic, then it is. And he really belives that his actor found her performance once she really got to know the character across the series.

Mikael from Acamar Films echoed that the performace of the child has to be right for the animated character you’re creating. He showed how their recent production of ‘Bing’ has some incredibly cute performances that really conveyed the high emotion and drama of losing a balloon or finding someone in hide and seek. His characters not only communicate with words, but they have an astonishing amount of ‘wallah’ on file.

Mikael feels that the key to directing children is your relationship with them. You need to establish a clear role that they are their to work. He also felt that giving the children ownership of their character and performance is a useful method.

All in all this was a thoroughly enjoyable, informative and, at times, emotional session that could have easily run for another hour. The respect for the panel was palpable and listening to how such results emerge from investment in children and respect for their abilities showed just how ambitious children’s media can be.