Educational computer games seem to be having a moment – the market is growing. This session delivered the promised ‘advice and best practice’ as well as at least two war stories I’m not sure I’m allowed to share, but seeing as it’s you… 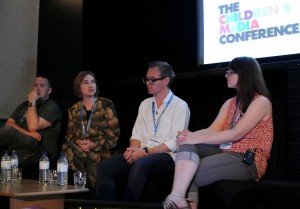 Freelance Digital Consultant and Producer, Trevor Klein introduced the session by talking about ‘The Typing of the Dead‘, a modification of ‘The House of the Dead 2‘, in which you have to type quickly and accurately in order to fight off hoards of zombies, setting up the session be explaining the evolutionary links between learning and fun.

Martha Henson started by introducing herself and explaining the work she’s been involved with. She’s a Freelance Digital Producer and Co-Director who co-organises LEGup and Edugameshub an online resource for educational games creators. Martha works with culture sector as a freelance digital producer and is currently working with the Science museum. Previously she’s produced games like High Tea for the Wellcome Collection. A game that teaches the player about about british colonialism that has had to date over 4million plays.

Next up was Phil Stuart, Co-Founder and Creative Director at Preloaded an agency that has shifted away from working with broadcasters to working with museums, in health and always on stuff with an educational remit – now supplying games for Amplify as well as corporate training and work in the health sector. They are keen to use the term games with purpose to describe what they make.

Angela Colvert is Senior Lecturer from the English School of Education. Angela was a teacher earlier in her career and now works at the University of Roehampton, she’s interested in collaborative storytelling, her PHD research was around alternate reality gaming and how it could support children’s literacy. Angela was brought in as an educational advisor by Osbourne on the game Teach Your Monster to Read, specifically concentrating on phonics.

There was also Chris Bradford Chief Operating Officer & Head of BrainPOP. BrainPOP make educational games mainly for the GameUp platform which can be found in one in four schools in America.

After the introductions the panel quickly got in to discussion and the question asked to kick it off was – what makes a good educational games?

Phil said “It has to be a good game, it has to be a fun product, it needs to be engaging. Designing the game to suit the needs of the user as well as the context they’re playing it in. The learning needs to be the doing part of the game. We want to avoid bolting on the content.”

Chris added that he felt there have to be broad levels of complexity, that learning games can’t just have peril, they need a much richer depth too them. He feels that educational games bring additional skills on top of the learning. As well as the learning you get the added bonus of problem solving and critical thinking. These are an important part of games but they’re much harder to measure.

The panel agreed that engaging with subject matter experts is such an important part of making educational games. If someone can explain a concept simply in two minutes then you probably can make a good game out of it. They can help you identify whats important in the subject matter and whats not so as content creators you can make informed decisions.

There was a question from the room about dealing with cultural differences of content made for the UK audience as opposed to other countries. Phil mentioned a project that he’s worked on which never got realised due to a difference in humour between the UK and the US. He described a game where you play a sperm racing to fertilising an egg in a cow “… it was graphic but it was a good game” Sadly although it tested well with a UK audience, the US audience found it far too gross and so it was never released.

There were lots of interesting questions but the one that got the most interesting answer was a question asking how much it costs to make a game. Martha talked about how she had spent some time trying to collect information about this. She was very candid about the costs of some projects she’d worked on saying that Axon had cost in the region of £60k (Phil disagreed and said he thought it was more like £45k). She said that if you had a bit over £5k you’d be lucky if you can get a re-skinned game – re-skinned games use an already-built game mechanic with graphics set up ready to be replaced to suit your project. This approach, therefore, is kind of unsuitable in the educational games market where as discussed previously in the session you need to be crafting in the learning.