First of all, well done to both delegates and speakers (and the solitary blogger) for cutting their lunch breaks short in order to attend this short, sharp session, which still managed to pack in a bounty of gold dust info on the thought that goes into commissioning games, from the commissioners themselves!

Taking it in turns to use case studies to share their wisdom, Channel 4’s Colin Macdonald was first to take to the stage and tells about ‘The Snowman and The Snow Dog’, a game launched Christmas 2012 in which you fly around collecting snowflakes. There were lots of statistics to demonstrate its success, but the one I liked best was that now, in total, 600 million snowflakes have been collected by players.

Colin swiftly but thoroughly took us through everything from idea and content – choosing a simple game that would able to a broad demographic – to download-rates and success – noting the boost in popularity with the arrival of Apple’s ‘New and Noteworthy’ feature, which selected ‘The Snowman and The Snow Dog’. Interestingly, Colin also added that this feature was preferable to possessing Apple’s main banner, as this switches frequently, whereas the ‘New and Noteworthy’ feature is more permanent. 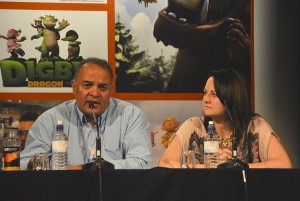 Mario Dubois and Rachel Bardill, of CBBC and CBeebies, respectively, jointly took us through the BBC Children’s universe and spoke of the way they have had to react and change in recent years. The goalposts have been moved, with a whole new raft of screens young children are taking up quickly; responding is key. Mario and Rachel explained, candidly, that the journey has been difficult (and it’s still on-going) but they’re now in a much better place to understand where to put games. Amongst their broader spectrum of case studies were their first play-along app, ‘Ludus’, the CBBC and CBeebies cross-over brand, ‘Fly High and Huggies’, and perhaps their most popular game, ‘Andy’s Dinosaur Adventures’.

The panel then took a brief Q&A, in which further valuable insights were offered into Commissioning decisions. Colin, for instance, specified his preference for finding the right partners in certain genres and making fewer but ultimately bigger and better games. The panel then headed off to the one-to-one sessions, so good luck to the delegates meeting them!

“Colin was brilliant and it was really interesting touching upon the integrity of content and game playability – you have to have a clarity of vision and take on board unique aspects of the brand your trying to represent.” Emma Cairns-Smith: License Acquisition Director – Egmont.

“It was (really) awesome – glad to see CBBC and CBeebies embracing the multi-screen world that kids are embracing.” Jon Mason: Jollywise.