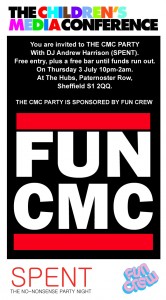 This year’s party – FUN CMC – is being sponsored by Fun Crew. We’re an independent studio developing dynamic content for kids, and well, you gotta fight for your right to party!! We asked the CMC’s powers-that-be if we could throw a good time for everyone. They said, “Yes!” but only if we played the Play School theme (yes, but our Turbo Rave Remix) and some Danish rap. Deal done.

We’re flying in DJ, Andrew Harrison, all the way from Glastonbury (via Stoke Newington so he can pick up a spare, clean T-shirt and feed his cats). Andrew will command the wheels of Sheffield steel (OK, plug in his laptop) and play a free-range mix of floor fillers from Chic to The Clash to David Bowie and Disclosure. Being former editor of Q, Mixmag and Select magazines we were hoping that he could pull in a few favours and bring his local pop-star pals, Pulp, The Human League and ABC to play live sets, but sadly they were all busy. Maybe next year?

Instead we’re throwing down a delegates’ dance-off challenge! Did you yearn to be in Legs & Co? Are your uprock freezes fresh? Have you remembered to pack your talcum powder soul boys n’ girls? There’s a free bottle of Absolut Vodka for the CMC delegate who proves to be the most hardcore on the dance floor, throwing shapes like no other and mouthing the words to the most songs… We also have to ‘big up’ Oli Hyatt  for generously sponsoring the FUN CMC bar tab, and to Kate Dickson from Nickelodeon for the karaoke Kavern.

See you all there! Hands in the air!