What does it take to keep a ‘classic character’ brand fresh and as relevant for new audiences as when it was created more than a generation ago?

Four much loved properties from the last century are all having a renaissance: ‘Paddington Bear’, ‘The Beano’, Roald Dahl’s ‘Charlie and the Chocolate Factory’ and ‘Dangermouse’. 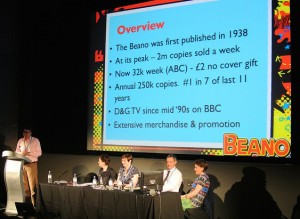 The oldest property is ‘The Beano’ – first published in 1938 and at its peak selling 2million copies. That number has withered but unlike its sibling ‘The Dandy’, it has not been allowed to die. Instead characters such as Dennis and Gnasher were developed into a TV cartoon series and even that has had to move online. DC Thompson is a family company and most challenges and changes have been of a structural rather than creative nature, as the company has moved to a more collegiate model.

‘Paddington Bear’ has, perhaps like DC Thompson, been a family concern, in that the author Michael Bond has always been very much involved in protecting the brand. I can’t talk about Paddington as a brand – he’s a bear! A real bear! Isn’t he? That, surely, is how he is perceived by the wider public – so well loved that when the Channel Tunnel was formally opened, he was the first Briton to travel to France. In bringing him to a new audience, with the upcoming movie, many different companies and interests have had to work together but always with a sense of protection and love both for the bear and Mr Bond.

It is the 50th ‘whipple-scrumptious’ year of ‘Charlie and The Chocolate Factory’, a book that has hardly been out of print, if at all,  since it was published. It’s been made into films and now a stage musical and an opera.  But essentially the book itself remains as the main property and as a whole entity: single characters haven’t been given their own series etc.  in order to bring it to a new readership, many of the golden anniversary celebrations both in the UK and overseas have been educational and/or philanthropic – golden tickets included in copies of the book, lots of literacy initiatives and benevolent partnerships.

When the news broke that Dangermouse was coming back, the press and public went wild… Wild I tell you, “Crumbs!” It’s 33 years since DM first broadcast and in some ways he’s never really gone away. So the public demand is there, as is a sense of brand heritage but in order to make DM relevant to today’s kids, the developers are opting for an even higher-octane sense of energy and pace, using top class storytellers from the UK and US. All of the characters, catchphrases and humour will be there, along with some new spies and villains and more global missions (please I hope though that we still get to go to the North Pole and into very dark caves, “Shush”).

Listening to the four panellists talking about their brands, what seems really important is understanding the value of your property. What is the core of the property that everyone still loves? That you mustn’t lose. Does the original still entertain and catch the hearts of a young audience? From these brands, it would suggest that it must – that the tweaking and updating are important – but not at the expense of what was good in the first place.