Kath Shackleton, of Fettle Animation, muses on the momentous changes in the animation sector in the last 12 months and reports on Kay Benbow’s Opening Keynote at the CMC Animation Exchange (4 April)

Time flies.  I can’t believe it’s one year since the Animation Tax Break came into force. I remember sitting at last year’s Animation Exchange thinking “this is great news for the animation sector” but not imagining that it would affect me, running a small animation company, quite so soon.  One year on, my business has moved forward exponentially with a series supported by tax breaks and new staff, courtesy of Creative Skillset.  I’m enormously appreciative of everyone who has been involved in making this happen and full of optimism for the future of our industry.

Earlier in the day tax breaks launched for games too, with the Government trumpeting the success of animation tax breaks as their starting point for the new development – really encouraging!

At this year’s CMC Animation Exchange we took a good look at what we’ve achieved and explored some of the nuts and bolts of different approaches to this, fuelled by the ever vibrant support of UKTI, a scrumptious lunch sponsored by  Industry Media and drinks at the end of the day from the lovely people at Aardman. I travelled home feeling encouraged and inspired.

Meanwhile Greg Childs, Editorial Director of the CMC, opened the day by reminding us that there are 255 children born every minute and also revealing some of the fabulous opportunities on offer at this year’s Children’s Media Conference and International Exchange 2 – 4  July (be there OR ELSE!) Early bird bookings are open now! 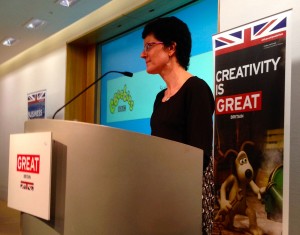 Kay Benbow, controller of CBeebies was in buoyant spirits, reaffirming the channel’s commitment to animation and most importantly how it is valued by the audience. They love its colour, vibrancy and immediate characters who offer “safe jeopardy” for young viewers and their families.

Kay felt that the Tax Break had brought real change and new confidence in the sector.  CBeebies has seen a real on-screen benefit, with the tax break bringing long-awaited shows to the screen much faster than ever before.

Animation is a cornerstone of the CBeebies schedule, with all styles, from CGI to Stop Motion.   Most is pre-bought with finance committed at development stage supporting the production process throughout.

It’s not just about comedy and cartoons, but programmes designed to provide real educational and developmental support for young children.  For example, Ra-Ra the Noisy Lion was created in response to concerns that some children were starting school at 4 years old with little or no language skills.

What’s The Big Idea is a pre-school philosophy show which encourages children to look at concepts such as “What is a friend?”  Many CBeebies shows engage creatively with a range of issues.  Rastamouse looks at citizenship, Mike the Knight helps children to “Do it Right”, Octonoauts explores teamwork, Boj celebrates difference in a multicultural community.

Animation is highly valued by CBeebies audiences, with 9 out of 20 of top shows being acquisitions.

Making animation in the UK is important to the channel.  There’s a strong legacy to build on.  Series such as Pogle’s Wood, Trumpton, Mr Ben and the Clangers are very much in the hearts and minds of the British public. Kay also revealed that the tests from the new episodes of the Clangers are looking truly gorgeous – really exciting!

In spite of challenging economic times, UK producers are adept at creating memorable and quirky characters which connect immediately with the CBeebies audience, and there is strong value in UK culture on-screen.  Some shows are set in the actual British landscape, such as Postman Pat, Timmy Time and Peter Rabbit, others draw on a broader British cultural sensibility, in terms of a sense of humour, or helping children with special needs. For instance, it’s not immediately obvious that Tree Fu Tom as a high end action animation is about supporting children with dyspraxia, but this is what really makes CBeebies shows distinct.

The Tax Break has had a significant impact.  The last 20 – 30% of production funding is hardest to find, this funding has really tipped the balance in favour of getting shows made.

This has doubled the numbers of new animated shows on-screen.  In 2013, 3 brand new shows launched (What’s the Big Idea, Q Pootle 5 and Mouse and Mole at Christmas)  In 2014, 6 productions came to fruition mostly as a result of the tax break (Dinopaws, Boj, Bing Bunny, Hey Duggee, and Ruff Ruff Tweet and Dave).

CBeebies has been able to change its acquisition policy to favour UK originated IP.  It’s increased contributions from 10% to up to 24% of the budget with the highest percentages going to animation produced in the UK.   Also the change in the acquisition quota from 20% to 30% is great for business.  Kay thanked everyone who supported lobbying for this.  Animations are getting better exposure because of this.  Older live action programmes which qualify as “originations” despite their age can now be rested earlier making space in the schedule for new animation shows which then potentially releases budget for more spending. 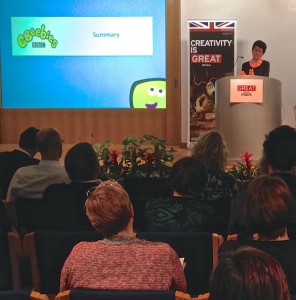 There’s renewed confidence in UK animation, new international interest, great energy and optimism and a high standard of work in the sector.  It’s also supported a revival of animation companies around Salford and Manchester, with Factory Entertainment, McKinnon and Saunders and Studio Liddell going from strength to strength.

There’s lots of new online content being developed, with new Woolly and Tig content online and Old Jack’s Boat shorts featuring Salty Dog.  These give the channel a chance to pilot new ideas without the full risk of a 52 episode series.

There are also new crossover shows to support migration from CBeebies to CBBC audience, with Kay working closely with Cheryl Taylor from CBBC.

CBeebies continues to work in strong partnerships with European partners and distributors.  Kay works hard to be clear about what the audience and the channel need, whilst respectfully accommodating the needs different partners.

The long-awaited CBeebies Playtime app, has been a huge success with over 2 million downloads.  Tablet and mobile useage is growing exponentially across the CBeebies audience, and Kay is mindful to keep looking holistically at the way audiences are accessing content through I-Player and You Tube, and promoting shows in an intelligent cross-platform way.

Kay said that she felt that she was “amongst friends” at the Children’s Media Conference and was hugely optimistic about the future of the animation sector and the future of CBeebies across all platforms.