The Tax Break, One Year On.

Kath Shackleton, of Fettle Animation, reports in full on the second panel session at the CMC Animation Exchange (4 April)

Last year at the Animation Exchange, 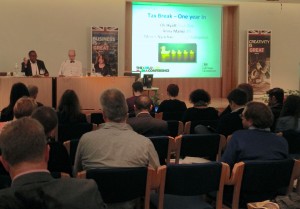 Oli Hyatt from Blue Zoo Animation and Animation UK illustrated his presentation with a collection of rubber ducks, urging us to “Get our ducks in a row”.

Are we there yet?

This year Oli is proudly sporting a spotted shirt and a comedy bow tie, fresh from a trade delegation to Korea.  He certainly feels that we are well and truly on our way…

Oli had some rather astounding statistics! Research for the Creative Industries Advisory Group suggests that since 2012, the UK animation industry has grown 96%, with 50% more employment in the sector.  Numbers of projects are on the increase, business confidence is better than ever before, with 96% of people being interviewed feeling“confident” about their company’s future.  Who’d have thought there’d be so much confidence this time last year?

There’s been an increase in training, inward investment and people coming to the UK to get their shows produced.  UK investment is also up especially from SEIS Schemes, with animation becoming a truly viable investment.  Animated movies are also making a comeback, with 5 planned for next year – more than ever.  Commercials are also on the increase with agencies thinking that it’s cheaper to animate than to pay an actor!

Anna Mansi Head of Certification from the BFI said she was delighted with how well the Animation Tax Break scheme has progressed.  She has received 40 Cultural Test applications, and is on track for the estimated 50 applications by the end of the year.  Everyone seems happy with the process so far.  Interim applications are processed within two weeks.  Final applications are completed within a 21 – 28 working day turnaround.

Anna is also pleased that the future-proofing of the test and the legislation has worked well, with the process working equally well for internet-only projects as well as more traditional broadcast shows.  Anna remains open to any suggestions for ways that the process can be improved, but feedback has been wholly positive so far.  Quarterly statistics will be published shortly so that everyone can see how this is developing.

There are also new tax breaks for games, and in some cases it’s possible to apply as either an animation or a game.  There are no lower limits on games.  If in doubt check with HMRC, they have good advisors who can help you on the telephone.

Over the next 6 weeks new guidance documents are being published by HMRC which should clarify some of this.

The claims process is relatively straightforward, with the vast majority of people applying getting the money back that they expected.

Moses Nyachae Director of Film and TV at Saffery Champness clarified the process of applying for the tax credit.  You should be applying your normal compliance procedures as a company.  The process is identical to the normal company tax return.  You just need to apportion costs for your project, and that figure goes into your tax return.

Do you have to create a new company for each project you make a tax credit application for?

It isn’t compulsory to create a Special Purpose Vehicle company for your project.  You can go through your main company, as long as you can compartmentalise costs for each of your productions in your accounts for tax credit analysis to be done separately.

The process is the same whether you’re putting through as one company or several SPV companies.

SPVs can be more flexible for cashflow purposes, as you can set your year end to suit, and some lenders will want their money ringfenced if lending you money against the tax credit. But the choice is yours in choosing the set-up to suit your project.

What outside of core costs can I apply for?

You can include a production fee of up to 10% without having to quantify what it’s used for.

Other hints and tips

Keep on top of your accounting throughout your production.  Give your accountants and the BFI enough time enough time to turn things around.  Also if you are closing finance deals, and under time pressure please let the BFI know when you submit your application as they can fast-track, if they know what you need.

Oli Hyattsaid that there are huge overseas opportunities which could be exploited further.  On his recent visit to Korea not one of the 8 studios he visited knew about the UK tax credit.

There are decisions to be made about how best to use UKTI and government money and where we want our influence on the world to be.  PACT,  Animation UK, UKTI and CMC need to work together and thinking on international development needs to be more joined up.

Key for the Government is export, with merchandising and licensing and toys and games having more significance for them than programme making and distribution.

There hasn’t yet been one application for a cultural test as a treaty co-production.  This is something which needs to be developed in the year ahead.

Oli Hyatt felt these were great times –  but there’s lots more to do to encourage greater.

There are many challenges and opportunities ahead.  If CBeebies has doubled its animated output, can other channels do the same?  Can we make animation for international markets?  Can we work together to lobby for a more developed children’s media landscape?  Can we argue for more resources to be allocated towards children’s media?