Kath Shackleton, of Fettle Animation, reports in full on the final panel session at the CMC Animation Exchange (4 April)

The session was introduced by animation veteran, Tony Collingwood who asked how it was possible to create a long-term business plan in such a rapidly changing environment?

Huw Walters, Senior Business Affairs Consultant at Industry Media, focuses on advising about international co-production.  With companies in all shapes and sizes and a huge variety of models for funding, how is it possible to create a business plan to stretch over a number of years?

You really need to focus on proper exploitation of your Intellectual Property.  Small companies can be very successful, because their production margins are low. In the race to sell your show, you need to hang on to as many of the rights as possible.  Also you need to keep overheads low in down-time.

Are there cheaper production methods?   Working with Ireland?

Co-pros between the UK and Ireland have grown exponentially.  A good example is the partnership between Pesky in Brighton and Kavaleer Productions in Dublin to create the CBeebies series Boj.  This is a direct result of the tax credit. They also moved across to using Cel Action, so there has been great compatibility between the software and production.  The assets can be created in the UK and animated in Dublin and this reduces cost.  It’s cheaper to animate in Dublin than in London.  But staff can hop between countries where needed – it’s more convenient than the far east.

Rosemary Klein Head of Kids and Factual at Rights TV says that co-pros can work well in the new tax credit regime. It’s a matter of separating the different companies’ elements to claim against the appropriate tax system.

The tax credit has legitimised UK animation and international partners have renewed interest in talking to UK producers.

Justine Bannister from consultants Just B, said that everyone is curious as to how things will pan out.  There are difficulties with compatibility with the French tax breaks due to the respective cultural criteria.

It’s noticeable however, that something big is happening in the UK.  Congratulations to all involved in the UK stand at Kidscreen for example – everyone has been talking about it .

Tax breaks have strengthened our hand as UK producers.  We’re now on an equal footing with international partners, with 20% to put on the table.  With new players such as Amazon and Netflix, can we use the same production templates?

Broadcasters are highly protective of their VOD rights, but things are changing.  There’s also a constant squeeze on ad revenue, which impacts on independent producers.

Are there any places we are missing out on working with?  We’ve 6 production treaties.  Interesting work to be done with Australia, Germany and China.

Gerard O’Rourke from Geronimo Productions joined via audio link to Dublin.  The Irish government continue to shift the goalposts, improving their offer for animation.  There’s a bigger tax break which is frontloaded at 32%.  Their investor-led scheme will be abolished in January. With the Irish tax break upfront and the UK on the back end, a UK /Irish tax break mix could be paradise!  However, the devil is in the detail, and it remains to be seen how this will pan out.

Huw Walters suggested that animation is not always cheaper overseas.  He encourages his clients to look at where the value lies.  As a company you need to identify the most profitable areas for you and hold on to the IP, as ultimately that will make you money. 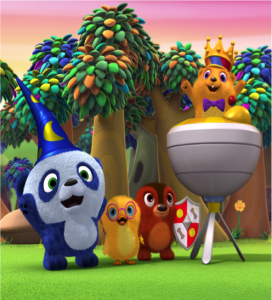 Greg Childs (Editorial Director, CMC) explained how the Children’s Media Conference is building bridges with an Indian animation association in Bangalore, where there could be some fruitful partnerships with well financed companies.