Steve Smith from Beakus attended the CMC Animation Exchange and sent in this full description of the third session of the day – on the issues around funding, cash-flow and investment in animation. 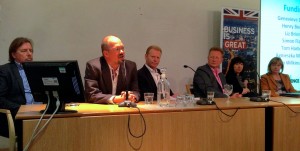 Tom introduced his company, Headgear, who are new to investing in animation. There was a lot of debate about Special Production Vehicles (SPVs) during this session, and straight away it was clear that SPVs are helpful in raising private equity. Genevieve suggested Tom’s company was an alternative to Coutts or Barclays.Genevieve introduced the session which would cover cash flow; deficit financing; how to get from 50% – 85% funded; EIS; and much to the delight of the audience, new sources of money!

Tom suggested there were a lot of private finance companies and banks competing, which makes the loans cheaper and that over time the cost of loans comes down as a market becomes more mature – this had happened with the film tax credit.

Genevieve warned that private funds like Tom’s may not cash flow the entire tax credit, allowing for a margin of error that could reduce the loan from 20% to 17.5% or lower.

Henry spoke next about his experience producing Olly the Little White Van. He had to retro-fit Olly to the new tax credits as the latest series had already spent money on development before the credits became law. So they spread the development costs across the duration of the series production.

He said it had been especially hard because Olly was made over 4 years by 3 production units – a bunch of freelances, and two companies which have since gone bust!

Henry suggested working it out just takes a lot of common sense.

Adrian spoke next about his experience of raising money for Pip Ahoy! He said they were currently filing their first return to HMRC. When the first budget for Pip was worked out, there weren’t any tax credits, so in a way claiming them now is like receiving a £1m bonus on the show! 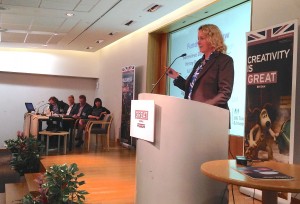 Genevieve reminded us that a producer can change their tax year to suit. She admitted that funders like Octopus and Ingenious were “not available to speak” at the Animation Exchange, but both use EIS to fund deficits.

There are 3 types of EIS:

The important things to note are that you have to have a good business model, that the risks are shared between you and your investors equally, and that you are properly organised.

Simon spoke about their investment (of £4 million) in Q Pootle 5. They took advantage of the SPV model, investing their own money and an EIS made up of 24 or 25 shareholders.

Henry’s experience was pitching directly to high net worth individuals. He joked that in 2009 CiTV weren’t offering much in the way of finance, so he actually borrowed money from friends – and ex-friends! (He retracted that statement..!)  And then attracted two organisations so that half of the £3.5 million raised was from EIS via a company called ‘Envestors’. He had to pitch the show idea in just 6-minutes, but luckily, he said, animation is always a more exciting pitch to rich people than pharmaceuticals or property! He said that unless you have a staggeringly well-known project, EIS will expect to receive three times their investment. He argued that was actually quite hard to justify in a pitch. But it’s certainly easier with the new tax credits.

Genevieve threw into the mix that you can also attract angel investors, like The Idea Factory. Just make sure your deal with them is not exclusive as you’ll need several investors.

Genevieve reminded us that the business plan should include things like a master toy plan.

Adrian set up his own EIS. He said an EIS should be seen as an additional tax relief to an already good investment. And rather than being exclusive, an EIS should be inclusive – of course try and attract the high net worth market, but the richer the investor the more choice they actually have, so it’s more common they’d invest in property etc.

He began to see EIS as a business for CHF. Now, a third of their business is fund raising, a third is production, and a third distribution.

He said there is huge opportunity for EIS in the retail market as “no one owns the EIS retail space”. CHF set up their EIS as a “baby factory” for new shows.

EIS provides the investor with 30% tax relief. It’s hard competing with Octopus & Ingenious, who own 80% of the market. But “EIS is ripe for the taking. The government is 100% behind them, and in effect 50% of the budget for Pip Ahoy! comes from the government through tax credits and EIS.”

Genevieve hinted that there are big court cases coming up that are throwing light on whether EIS schemes are actually being using as “milking devices”.

Liz said that animation is certainly a risky investment. She said that at the beginning of March 2014 HMRC decided that co-production was not eligible for EIS. This represented a change in the Inland Revenue’s outlook, as “we had been doing this for years”. So she was surprised and disappointed at this development. She urged that there needs to be a change in the law, which will require lobbying.

Liz also reminded us that there are other tax credits available to us – such as R&D.

Genevieve then asked Agnieszka about the 12.5% available from Creative Europe. She suggested that the best thing about that fund (other than the actual money) was that it makes you think seriously about your show as a business. It makes you get a distributor, some pre-sales and work out your budget. 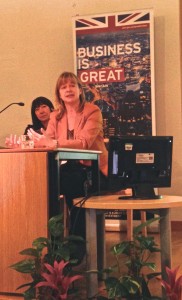 Agnieszka started by saying the funds from Creative Europe are basically old fashioned, non-repayable grants. The TV Programming scheme has been running in one form or other for over 20 years, and was set up to improve distribution of TV shows within Europe. She argued that money could have gone to broadcasters, “God forbid!”, but goes instead to indie productions.

You need to prove the project’s viability with letters of commitment or contracts with a minimum of three broadcasters.

There are two application deadlines each year, usually February and June and the ‘window’ to apply is between when you have 50% of the budget in place (from 3rd parties, not your own investment), up until the start of animation itself.

She urged people not to apply as soon as you have 50%, but when they are in strongest position to apply.

She warned that the new tax breaks are shifting attention away from pre-sales, which is a false economy and “something to watch out for”.

You should really see their fund as “post-production money”. EIS is not usually compatible, or SPVs, because Brussels wants to help grow one company rather than having that company chopped up in to separate SPVs.

Besides, the company has to be financially stable, judged by looking at company accounts, and of course new SPVs won’t have a financial history to look at. However, the good news was that the project may still be selected because of it’s own strength. But if the company’s own financial strength was in question usually the grant only becomes payable right at the end, causing the producer to cash flow the entire grant. She reminded us as well that if the ‘mother company’ owns the rights and gives them to an SPV then the SPV will inevitably have to be the applicant after all.

Genevieve gave the example of a company that made a successful application but also set up an SPV, and now can’t get the grant money from the mother company to that SPV. So it was maybe better to apply as the SPV and face the cash flow problem.

Agnieszka added that the project itself is tested first, then the financial stability of the company, so it’s true that if Creative Europe love the project they’ll give it the grant despite failing on a financial front.

Genevieve reminded us of an analogy Olly Hyatt had used one year ago at this event – something about trying to get all your ‘ducks’ aligned behind the ‘mother duck’. (?!). And a Creative Europe application really helps you to get your ducks in a line…. Agnieszka said that was because after all “there’s cash at the end!”.

Simon Forrest (Accorder Music) asked what period of time do investors need to get paid back in an EIS.

Henry said EIS expects three times the investment after 3 or 4 years. There has to be some kind of exit, where the company gets sold for dividends. In his case he had 67 investors who were like “cats in a bag”!

Simon (Bob & Co) said he was expecting two times the investment in return for their Q Pootle 5 fund over 8 years… He said most investors want to be in this for a long time, especially with animation which takes a long time to generate income.

A question came from the floor about what the actual fee deal is for an EIS.

Simon tried his best to answer without too much detail! He suggested it starts around 30%, descending to 15% as the show succeeds, which creates incentive for the producer. But Bob & Co typically put in more than 30% of budget.