Steve Smith from Beakus attended the CMC Animation Exchange and sent in this description of the second case study on funding for animation. 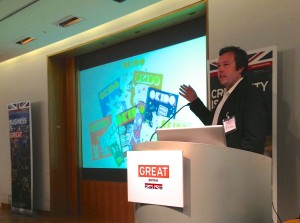 Jules explained how his company had just begun work on a new series for CBeebies called Okido.

They currently have 40-50 people working on Okido, which started life as a very non-commercial, self-published magazine about science and art (which, Jules explained, gave the series project a “backbone of integrity”). So funders saw their input as a philanthropic investment as well as a financial one.

Early tests were done in-house, and they took what they had along to CBeebies. However, it was clear Jules needed to develop the project some more, so they continued development in their downtime – crucially funded by themselves.

They made a 45-second trailer to show at Cartoon Forum which introduced the characters with a song.

Their 20-minute pitch led to interest from DHX, who are now the show’s distributor. Jules went back to CBeebies and after a 6-month wait they were offered 24% of their budget for an acquisition on the channel.

They received a certificate for the UK Tax Credits, taking their funding to just short of 50% on the £4 million show. Genevieve Dexter from Serious Lunch also came on-board as a consultant. Jules was keen to retain rights, especially from a creative POV, because the studio had already put so much time and energy in to Okido. But they appointed Envestors to raise EIS funding. That meant flying to various tax havens and presenting an 8-minute pitch. He admitted that they didn’t raise as much as they’d hoped, but they used the same investing document to pitch to other potential investors.

Genevieve brought in some more pre-sales (TG4, HOP! etc.) but Jules found it more usual that broadcasters were slow in signing for pre-sales.

Then he tackled the Creative Europe application. He’d already formed an SPV for the EIS, as they wanted investors to put money solely in to Okido, not his company, and so fell foul of the requirement for  2 years of accounts. Jules admitted this was something they’ve since had to work quite hard on, but happily “it has been solved”. Meanwhile, they closed the EIS in October, short, but at an acceptable level. Most recently, Jules has talked to Skillset. He joked that in terms of staffing Gumball has “everyone as far as we can tell!”, but they agreed a training package for the first year of production, and are aiming to deliver the first 26 episodes in March 2015.

There was a question from floor as to whether Jules had looked for international co-production partners.

Jules said the risks had outweighed the benefits in terms of communication, timezones, and extra layers of management. Having raised money from investors, which he was responsible for, if his co-pro partner had let him down it would make Jules’ own risk that much more serious…