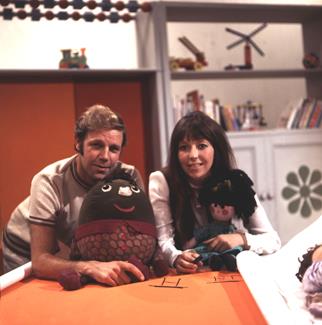 The first ever programme transmitted on BBC TWO on 21 April 1964 was ‘Play School’.  In classic ‘W1A’ fashion, this was completely by accident, as a power cut in Shepherds Bush had blacked out the channel’s glamorous launch planned for the evening before.

The Children’s Media Foundation is supporting a ‘Play School’ reunion at Riverside Studios, where the first programmes were made, on the afternoon of May 3rd.  Past presenters, musicians, producers and anyone who worked on the show or still feels the love for it, will be attending.

Brain Cant, Derek Griffiths, Carole Chell, Fred Harris, Johnny Ball and many more of the familiar names from both in front and behind the cameras will be there to raise a glass, cut the cake and indulge in a little light-hearted reminiscing about the show which shaped so many children’s lives, saved parents’ sanity and set the tone and standard for the British pre-school pre-eminence we see today.  Stars from the current CBeebies channel will also be on hand to say “thank-you”.

This is a ticketed event open to anyone who worked on, or has an affection for ‘Play School’ and all that it represents.  You can book tickets here at a cost of £25 per person.