The final events in the Manimation season, bringing business and creative insights to the Manchester animation community, took place at The Sharp Project on December 12, 2013

After the business focus of the daytime event, the final pre-Christmas social and creative treat was to meet animation legends Brian Cosgrove and Jean Flynn – who worked closely together on the iconic projects to have emerged from the Cosgrove Hall Studios, and were now linked agin in a new venture – Cosgrove Hall Fitzpatrick – with a new studio opened in Didsbury.

Some brief notes on the topics under discussion in Manimation: New Players, New Perspectives from Helen Brunsdon – the event producer…

The purpose of the day – to uncover where are the alternative sources of distribution and funding? Who’s making money in these new spaces and how? What are the creative opportunities and challenges in new approaches? And where do animation and interactive media meet? How interactive media companies and publishers are functioning in the kids’ space and how they relate to animated content – online, in apps, in motion comics and on TV.

Jocelyn Stevenson started off the day by stating that with 40 years in the business she was in fact an old player – but thanks to Mind Candy, immersed in new perspectives.  She then spoke about the Old World and New World and how it’s not as simple as out with the old and in with new. It’s all about evolution.  Her take not his was that  evolution of anything- a species, an organisation, an idea, or a cartoon character – involves three basic stages:

Then the cycle begins again…   Consequently,  we live in what she called a VUCA world:

But the solution to all this volatility and uncertainty s that people want stories. People love stories, and they don’t care how they get them.  our job remains essentially the same.

She then went on to talk through Moshi Monsters and how the story started online which led to commercial success.  And now there is a movie…which launched on December 21st, animated by Spider Eye in Cornwall (Mind Candy were insisted it should be animated in the UK).  It had a tight budget, was very faithful to the key elements which fans love about the Moshi world and characters and was written by the head worker of Moshi content, so big efforts were made not to stray from the core brand.  She urged us all to take a look and see how the brand translates from an online story world to the more conventional world of film.

James revealed that from a background “tinkering” in graphic design, via companies specialising in animation, he had graduated to wards the Made In Me concept which emerged 4 years ago – which he characterised as a bunch of visfx people interested in storytelling.  Parenthood was also a spur to do things in the children’s market – plus a lifelong passion for children’s media in all forms – film. comics, picture books (the last of which James considers the “supreme art form” – pure, simple, sparse and direct.

It was the lure of books that drew the Made IN Me team to publishing, having started with an interactive storytelling app called The Land of Me.  They spent £40K on The Land of Me.  It had critical success but didn’t take off.  But the learning from it went into a much better understanding of what they could offer as publisher of other people’s content – and with only a further £50K investment Me Books was launched, as a content publishing platform for enhanced e-books.  A million £1.99 downloads later, the company can claim some success.

It’s fascinating to consider that a £2.5K app can go forward to be nominated for a BAFTA award, and that the table for the ceremony cost more than the app to produce.  When asked about the business model for the author James said it was a 50/50 split with Made In Me taking the production costs.

The next Case Study was delivered by  Jesse Cleverly.

Jesse started by saying what Wildseed Studios are all about:

Wildseed have put small amounts of initial funding into projects – sometimes as small as the cash to buy a new computer for a bedroom film-maker to up his game. (Watch out for Wildseed’s collaborative Zombie Movie project…)

Typically they plan 50 x £10K investments which will lead to  to a next stage of 10 x £25K and filter down to 5 x £100K – an iterative investment process.  Their VC backers were happy with a potential 1 in 50 strike rate.

Jesse outlined how Wildseed work with content creators, what to expect their standardised deal to look like and the next steps if someone in the audience felt they wanted to work with the Studio. 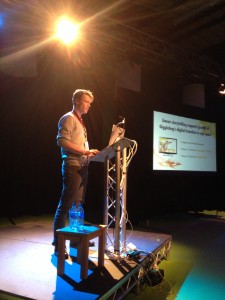 Anttu Harlin had flown in from Helsinki to present his property Gigglebug and talk through how the content has developed from an app to a successful TV series (the most polar pre-school show on Finnish TV)  and now to an online community.

Initial conversations with YLE the Finnish broadcaster had been around how to turn what is essentially a lighter generating app into a complex story world.

He talked through the costs of what it was taken to reach this point and what the finance plans are for the future investment.  Strategy for 2014-16 is to develop a series of 8 related apps, a 52 ep series (longer than the first) and to push out into licensing and “real world” presence.  Their approach to the app is that it should net be expected to be revenue centre – rather a promoter.

Financially some of the trickiest elements were finding investors who understood the need for significant sums upfront, with returns being relatively far down the line.

John is a consultant in ross-platform specialising in where animation, publishing and apps come together.  He first turned to Julia Posen from Walker Books who had slipped out of a Board meeting to join the event by Skype!

They discussed how Walker were taking a different approach to what would previously have been simply licensing their properties for exploitation by third parties, and had become instead a media organisation with focus on animation, apps and more recently licensing around their properties – particularly in the children’s area.  When John asked Julia why – she explained that previously handing the rights to third parties meant a loss of brand and content control – so dilution of the power to take a holistic approach to brands exploitation, and the lack of control of prioritisation and timetable meant that brands which were important to the publisher could be lost in the producer or broadcaster schedule.  Retaining control provided more power to the brand owner to determine the future of the property.

Julia used Tilly and Friends as an example of how a deal was put together – a partnership between Walker, Jam media as animation producer, Aardman as distributors and CBeebies as broadcaster.

Julia explained that the Walker point of differentiation was that it would only take its now properties to the multi-platform market – giving focus and control.

John welcomed the rest of the panel to discuss the various business and creative development models which had been showcased:

Sarah Muller from CBBC and Sharna Jackson from new VoD venture Hopster  joined the other speakers in two separate panels to discuss topics which ranged from the massive use of the BBC I-Player, the power of viral, product placement in apps, Hopster’s vision for education and content side-by side, their interest in the animation market and much more.

As daytime delegates gathered for a pre-Christmas drink in the Sharp Project communal area, attendees for the evening event arrived to join them.

The evening saw an inspiring conversation with two of Manchester’s legends of animation Brian Cosgrove and Jean Flynn.  They talked about the launch of Cosgrove Hall, it’s phenomenal successes, including Wind in the Willows, Dangermouse and Count Duckula, its closure and their new venture, Cosgrove Hall Fitzpatrick, animating in Manchester once again.

Manimation Inspiration was produced and presented by Westley Wood – who also talk about his successful project to preserve and display the Cosgrove Hall working materials archive.

The Manimation season was commissioned by MIDAS, the Manchester Investment Development Agency, to stimulate and celebrate the Manchester animation sector.  By collaborating with the local animation community, key media service providers and the University of Salford, the CMC was able to create a unique series of events which had national and local perspective, business and creative aims.