Following a short introduction from our conference big-cheese Greg Childs, who dutifully fulfilled the promotional duties, Robin Lyons took to the stage (the desk bit at the front) and opened “Manimation: Part 2” in apt and charismatic fashion. As soon as some small technical difficulties with an IPadhad been overcome (kudos to Greg for some great stalling). 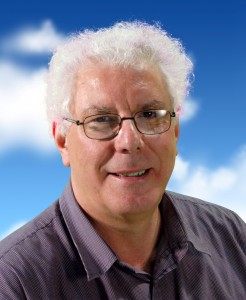 The overarching message of this short but genuinely inspiring session was this: Nobody Knows Anything. Robin went about explaining this bold opening statement by reliving his experiences of working on “Super Ted”, a show which has a remarkably simple origin story. It was a creative idea and they did what they wanted. With his hands held up, he admitted that he and his colleagues decided upon details such as episode length and series length by just having a bit of a guess! At the opening of an event addressing animation going global and increasing trends for trans-media and co-productions, it was strangely apt that this session reminded everyone about the importance of simplicity.

Indeed, as Robin went on to discuss the potential complications involved in co-productions, he was keen to reassure his audience that if the idea is universal and the relationship between co-producers is developed in the right way, then your idea can find similar success. He believes that over the next ten years, those who get past traditional restrictions, including the confinement of the”target audience”, as viewing becomes more in the hands of the viewer than the broadcaster, and at the same time find novel ways of getting work funded/distributed – will be those who succeed.

In summary, those who keep keeping things simple, but move with the times.

After all, nobody knows anything.  Truer now than ever.