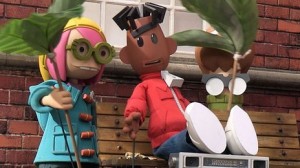 In what was a bonus evening event for those at Manimation – Going Global, organised as part of the Salford Media Festival’s Generation Programme for young people – in this case animation students at Salford University – the Manimation Festival joined a fascinating insight into a unique new CBBC show, STRANGE HILL HIGH.

Show Runner Josh Weinstein was amongst the panel as the audience was taken through the process of how STRANGE HILL HIGH was brought to life, from origin right up until… well, now, with series one already transmitted.

Phil went on to elaborate upon the details of this labour-of-love production, which films at a rate of 2 minutes per day, with 2 camera crews, 6 puppeteers and a small army of support staff! The dedicated team thrives to achieve the most fluid action possible. Phil added that each episode is treated like a mini-movie, to the extent they are even lit like movies!

Still, the hard work has paid off, as a couple of clips of the show demonstrated. Not only were the visuals hugely impressive, but the warm characters and sharp humour drew big laughs from the audience. Josh, whilst sighting his aversion to public speaking, gamely still explained much of the writing process and told of how the development of the show took ages, as it was very hard to imagine the look and feel of what they were putting on the page. But when the right story finally came, they knew they were onto a winner!

Josh also cited some helpful contrasts between the US and UK development processes, saying that development in the US can go on for years and yet sometimes still stand still, whereas his experiences in the UK have felt much more collaborative. – and the commissioners were up for innovation and risks.  He went on to discuss his love affair for Manchester in particular, sparked in his youth by the music that the city spawned in the 1980’s.

Congratulations to the panel on STRANGE HILL HIGH. This project (originally based on an idea inspired by short PULP FICTION film parodies!) may have been a long time in coming, but it is now a successful balance of American and local talent which has already traveled well in overseas showcases and even bagged a BEST ANIMATION nomination at the Children’s BAFTA Awards.  Looks like it was worth the wait!