UK@Kidscreen – Taking a Bite of the Big Apple

The 54-strong official British delegation to the Kidscreen Summit in New York was a great success. 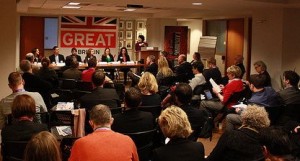 Breakfast Briefing for the UK@Kidscreen delegation

With 40 companies represented, ranging from music composers, writers and consultants to animation and live-action producers, interactive agencies and rights management specialists, we presented a vibrant snapshot of the UK kids’ media scene to the 1600+ Kidscreen delegates.

We are delighted to say that the group reported significant prospects and potential business.

UK@Kidscreendelegates were also successful in the Kidscreen Awards. Big (and small) congratulations to Kindle Entertainment who won the Best Writing Award for… Big and Small.

Thanks to UK Trade and Investment, Linda Kahn and BAFTA New York, and Laughing Gravy Media for their support. Finally – good luck with all those leads to the whole gang of companies and freelancers who were a pleasure to work with and made such an impact.

Watch this space for news of the bigger and better UK@Kidscreen 2014.