A blog post by @Fiona_McLean on work and play at the conference. Originally posted on http://www.destinationtellyland.com/

Last week I trundled over to Sheffield for the 8th annual Children’s Media Conference. I’d heard about the conference just after it had finished last year and I still don’t know how I hadn’t heard about it before seeing as it’s almost on my doorstep. Judging by the website it looked like quite an impressive event full of networking opportunities with big shots in the Children’s Media industry but the tickets were beyond my budget and I would have to sell an arm, a leg, possibly a few of my teeth and all of my hair to afford a full price ticket with all the trimmings included. Instead I decided to offer my services as a volunteer for the duration of the conference. I think it was probably the best decision I’ve made all year. Not only did I get to attend this amazing event for free and have my accommodation, travel and most of my meals paid for me but I also made a lot of fantastic new friends. I also discovered that I have some pretty nifty leadership skills that had been lying dormant waiting for such an opportunity to arise.

I received an email a few months ago saying I had been designated the role of Technical Director which sounded quite impressive but I didn’t really understand what that would actually involve until I got there for my training the day before the conference started. I soon discovered that I would be put into one of four showrooms to oversee and explain the running order of the individual sessions that took place in my allocated showroom. This meant that I was to blame if everything went horribly wrong or even if something went a little bit wrong….no pressure at all then!

I had two technicians, two runners and up to six speakers in any one session and half an hour between each session to get everyone out and get a new wave of people in. This meant that I had to ensure all the speakers were miked up asap, that they knew about how tight we had to keep it and that they stopped talking when they should (aided by our wonderful traffic light piece of tech that was placed on their table) and that they read out the house keeping notes at the start and end of their session. I also had to make sure we had the right number of chairs and water bottles on stage, the techies had connected everything they needed to connect and knew the running order of the slides and videos, decide when we were good to start the session, let everybody know that we were starting the session, make sure the opening music was playing and then get the runners to open the doors to let the hoards of people dash in. For the busy sessions (there were a few) I had to make sure that people didn’t leave empty chairs in between one another which meant that either myself or one of the braver runners would go down to the stage and ask everybody to shuffle up to the end of the rows. This happened beautifully some of the time and less beautifully at other times. Then there was the Q&A sections where I had to make sure my runners got the mics to the people who wanted to ask questions and then when it all finished I had to make sure everybody got the hell out as soon as possible, do a quick whip round to make sure there was no rubbish left in the isles and then get the next lot in to do it all over again. It was a bit mad but after the second session my smile was less forced and I actually relaxed into the role and by the time we had wrapped at the end of the two days I had been told that I had done a very good job by more than one person. 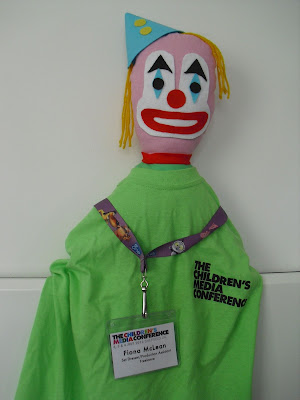 When I wasn’t screaming on the inside and I had clocked off for the day there were the networking parties to attend in the evenings. This mainly involved taking full advantage of the free alcohol that was being forced into my hand at regular intervals, fighting my way into the path of the staff who were making the rounds with the canapé trays, chatting drunkenly to people who had interviewed me the week before for a job that I didn’t get and dancing around like a loon to Thriller. It was all good fun…well it was before one of the straps on my dress broke and I had to keep tucking my dress around my bra strap every five seconds so as not to expose myself to the world. Apart from that it was all amazing.

To wrap it up here are a few personal highlights from the event:

The whole four days I was in Sheffield was such an amazing experience and the city itself is truly beautiful and nothing like how it’s portrayed in The Full Monty. I had very little sleep whilst I was there and despite having a rather sticky bathroom floor in my Travelodge room and missing nearly all the tennis matches that Andy Murray won I cannot wait to do it all again next year!
Fiona McLean