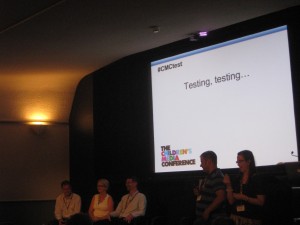 For those in the creative processes of generating new children’s entertainment, user testing is not only necessary, but now one of the most important stages in drafting and writing. Without it, one of our greatest questions ‘how do we talk to children’ will never be answered.

‘Testing, Testing…’ explored the unpredictable and ‘make or break’ arena of screening new material to a child audience. For Josh Selig, President and founder of ‘Little Airplane Productions’, broadcasting that doesn’t apply user testing to their programming suffers greatly. What seems like the next big thing can be revealed as a five minute wonder with its failure becoming apparent immediately when broadcasted in front of the people that know best….and I do not mean television executives.

The benefits of user testing could not be more celebrated by the panel. Checking your material with children is not only fast, inexpensive and fun, but stories can be built on and improved dramatically. Josh Selig’s recent storyline involving a moth drawn to light proved to be too complex for his young audiences, and cowgirls were not at all understood by a UK audience. After adapting this, responses by the children in the group rose greatly.

However, there are issues that producers must be mindful of. John Kent summed this up nicely with a Henry Ford quote. “If I had asked people what they wanted, they would have said faster horses.” Taking risks is important, but so is the effect you can have as a facilitator of user testing on children. Young children often have a ‘yes bias’ with a clear eagerness to please adults, and many internal and external influences can change a child’s behaviour when consuming media, be it a strange environment or date or time of day.

However, thankfully, as Dr Amanda Gummer explained, there is little subtlety to a child’s reaction to television. If they are not enjoying it, it only takes seconds to work that out. Even when they may be quiet, their faces certainly aren’t.

Despite this, the popular method of monitoring a child’s eye contact with a TV screen to measure levels of attention was highlighted by John Kent to be ineffective as this ‘clinical method’ has ‘little texture’ as children engage with television in so many ways.

For those with new material, the message was clear: no matter if it’s with your own children, your friends, or in a high budget testing room, you must try out your material on children. They are your audience, and if they are not engaging then the material must be changed.