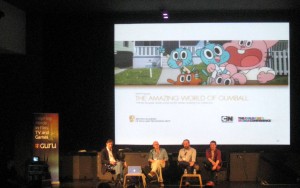 Correctly described by its director as a movie in a minute, each episode is nothing short of a children’s blockbuster; ‘The Amazing World of Gumball’ is quite literally amazing television for children.

This BAFTA Presented event offered attendees an exclusive world premiere of a series two episode and a chance to put their questions to the makers and producers of the award winning cartoon. The fast, funny and very cool show proved to be a big hit with an adult audience with ripples of laughter filling the venue during the genuinely hilarious madcap moments. With graphics never before attempted on TV and a dedicated team operating on huge budgets working together across the globe, this is a far from standard children’s show.

So what did the makers have to say about their global success?

Taking a giant leap from advertising, the brain behind the program Ben Bocquelet found his luck after spending his time drawing and developing characters and scenarios loosely based on his own experiences with his family. ‘Sticking to what you know’ was certainly his way to a smash hit show.

But what if you’re family aren’t as wacky as Ben’s? Warmth, compelling storylines and humour is key, and without it, ‘The Amazing World of Gumball’ would not have been able to find its feet as Mic Graves, Series Director explained. Although the ‘action route’ to children’s programming was cited as a sure fire way to lay the foundations for a new children’s program such as the US’s Ben Ten, Pixar’s animations was the real inspiration that drove this cartoon forward; pure focus on kids and beautifully executed in a smart and funny way is an unparalleled basis for children’s tv.

Without warmth, character and a fun sense of humour, new ideas will struggle to fly.

The British Museum and Youth Board Member

‘The Amazing World of Gumball’

Working in youth-led media initiatives for the past five years has taken Tom all around the world; from seminars in Sweden to tweeting in Taiwan, he's been promoting the importance of the youth voice in mainstream media as the UK youth media ambassador. After his first spell working for BBC3,… Read more