The CMC Writers Work Out
Produced and presented by Alan Gilbey, freelance screenwriter and show developer.

Alan Gilbey’s session was described as an active session and it definitely was! Crammed with great stories, top secrets and really fun ways to practice and get creative, it really was a workout for the mind and the body. 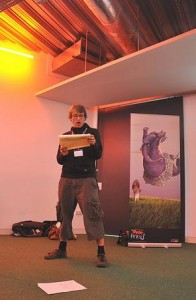 Focussing on the art of developing stories, Alan began by giving us a whistle stop tour of the beginnings of animation, whilst at the same time giving a brief insight into his own story.

Then things began to get physical.

A warm up, involving a series of mildly embarrassing ways in which to make a spectacle of ourselves, began to get our creative juices flowing and our inner editors silenced. Then the work out really got going with a series of group brainstorming sessions about surprising characters and scenarios. Continuing with the theme of storytelling, Alan took away the comfort of dialogue and forced us to show rather than tell, and we dived head first into pitching our favourite ones.

A quick break was then needed to have a go on Europe’s largest indoor Helter Skelter!

Back to the session for more brainstorming and walking pitches, and before we knew it our time with Alan Gilbey was up. We left the workshop buzzing with ideas about skeletons, snails and everything in between. As well as proof that though writing can be a lonely process, it doesn’t always have to be.