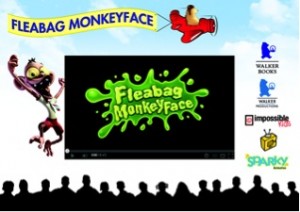 Karl and Helen did a double-act presentation introducing us to the highly successful, fast-paced and fearsomely funny animated series ‘Fleabag Monkeyface’, a 52 X 11’ series, aimed at 6-11 year olds and screened on CITV in the UK.

Helen summarised how Walker Productions is a global division of the Walker Books group and develops Walker content for other media platforms- working alongside a range of production partners. They seek new partners and new projects which fit with the overall Walker brand which is how ‘Fleabag Monkeyface’ started out – as a series of 6 hugely popular books by the British award-winning writing duo, Knife and Packer, and published by Walker books between 2006-2011 with Walker Productions acquiring the rights from the author in 2009, leading them to acquire the TV tie-in publishing rights in 2011.

To get the TV series off the ground Walker Productions has worked with Impossible kids who have a record of developing and producing Children’s series, the animation studio and executive producer partner Sparky Animation is based in Singapore and Karl took us through how the funding split operates- with 60% based in Singapore (Distribution and L&M) and 40% remaining in the UK and covering underlying rights, Traditional publishing and TV tie in publishing.