Dan gave a fun, energetic and dynamic presentation about one of his favourite projects he’d worked on (and admitted he could talk for hours about it) as it started for him about three and a half years ago and became the Tate Movie Project. It’s a multi-platform property which resulted in a half hour, kids BAFTA winning film, an educational programme, a musical strand, a touring roadshow, online world and the design and idea generators were children, who’d attended various workshops throughout the UK. 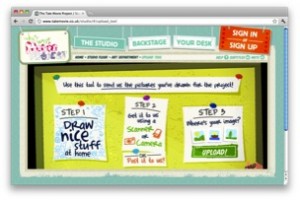 iginally came from the advertising agency Fallon, who approached Aardman with their simple idea “We want to make a movie with thousands of kids across the nation”… Their mission statement was a perfectly constructed and stated “that the project would endeavour to provide children with a structured narrative context in which they can have the freedom to be creative and constructive on their own terms without adult received wisdom that dictates what a children’s movie should be”. Within Aardman the director was Sarah Cox and CBBC came on board as a media partner.

Dan and his team created the website and a suite of tools in a virtual studio (animation/writing/recording) so kids could share, vote, discuss, follow blogs and reward each other.

rilliant illustrations created by kids which highlighted what they’d like to see…. one of the greatest laughs were for “ Mmmmm Spaghetti in a Cone…”- genius idea!

Part of the London 2012 Cultural Olympiad, The Tate Movie Project is supported by Legacy Trust UK, BP and the BBC. Delivered by Aardman and Fallon.