David presented the last case study of the day which was for “Business Mouse” created by Modern Toss and animated by David’s team. Commissioned by C4 as an online mini-series of short animations the aim was to use them as a stepping stone to the launch of a full length TV and multiplatform brand. It won a RTS award for Best Online Video in February 2012.

David pointed out the increasing use of multiplatform as a development arena with a wide range of successful case studies including ‘the Annoying Orange’, ‘Moshi Monsters’ and ‘Angry Birds’.

The development of Modern Toss from self-published comics in 2004 to fully multi-platform series by 2012 was reviewed and key learnings were high-lighted. These included the importance of ensuring continual media presence across any arena available ( from magazines to Gallery Exhibitions) and being able to sell merchandise as you go along to fund development. In the era of applications such as WordPress and Shopify, never mind eBay, it has never been easier to create your own retail operation that can actually bring in decent money.

Finally David pointed out several reasons for optimism with Animation Tax breaks , the Seed Enterprise Investment Scheme and the emergence of new funding partners such as YouTube and Netflix as all being recent positive developments for UK Animation. 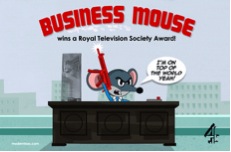 After a decade of gloom there is finally light at the end of the tunnel for the industry.