From BO to Bra’s – What do Tweens want to Ask Lara?

I don’t know what’s happened to my blogging schedule today, but for some reason I’ve just had two back to back sessions about pre-teens and puberty. Fascinating – but you can’t help but think back to your own teenage years. Eek.

Ask Lara is a new animated sitcom that’s about to be launched by BBC Scotland. Series one will be 50 x 11’ episodes featuring a group of kids who are going through puberty. Some of the characters are excited at the prospect, some are terrified and denial. But a common theme for all of them is that they all have questions about aspects of puberty that are answered in the shows.

The series covers subjects such as friendship, wet dreams and rejection (not necessarily in that order!), but Julia’s careful to point out that this isn’t a series about sex education, it’s series about growing up.

The biggest for the team developing the series was to accept the world of the pre-teen might have changed, to park their own memories of puberty, and really get to grips with what today’s kids know and understand. Specifically they needed to know:

And that’s where Sherbert came in. They introduced some novel methodologies to help kids really open up.

– Bedroom hangouts involved meeting children in their rooms. And environment that let them feel comfortable, and provided its own stimulus. – Moderator-less sessions involved getting groups of children to lead their own discussions (girls are happy to speak, boys just won’t touch some subjects) – And simultaneous sessions with children and parents, separately and together dealt uncovered some of the more emotional issues.

Sherbert also used some more traditional techniques to help them on their way. By giving Mums a diary for the week leading up to the interview session, the team gained revealing insights into relationship between parent and child; it also saved time because the interview session could go straight to the point rather than spending time building up to it.

And the kids were given words to talk about and pictures to annotate – allowing them to start talking about things in a way that made sense to them and to reveal what they didn’t know.

The work threw up some fascinating insights. For instance, many children said they were scared to look for answers Google; on the one hand they were scared of what they might find, on the other they were worried they’d get into trouble if they found something inappropriate.

In summing up the research work, the team reckon that it would be unlikely to that they would have been able to understand the extent of kids’ anxieties without modifying their techniques.

For my money, I think there are some really good ideas that would be worth trying when we talk to groups of children. And not just for programmes about puberty! 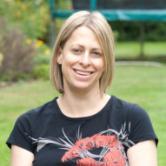